Your character, no matter your gender choice, begins the story by flying in on a blimp to fulfill an undisclosed mission. After getting a bump on the head from some renegades that results in your character getting amnesia, you get knocked off the blimp and into the castle where a green dragon lives. You soon learn more about the castle and the circumstances you fell into, but your original purpose remains a mystery while you work to ward off your amnesia.

My big surprise with Rune Factory came when I discovered just how much of this game is exploration-based. You eventually unlock access to your blimp, and you can fly out to different zones to explore and further the story. You find different resources in these areas, making it important to return to certain areas to get the resources you need. 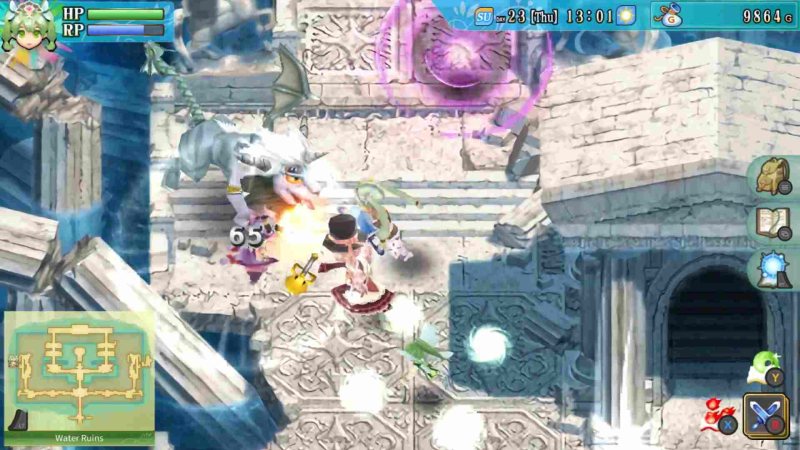 To complement this, the simplistic combat system plays into the formula well. You slay enemies in order to progress further into zones and their dungeons, and it makes for a good time in the short term. You also learn some simple combo attacks, like using dash while attacking or holding the attack button to strengthen your hit, but the combos never get complicated.

Everything you do grants you experience in some skill. Much like in the Elder Scrolls games, you must repeatedly perform a task or action in order to level up that action, like leveling attack by attacking enemies. This goes for farming, sharing gifts, talking with people, and so much more. These contribute to your character’s overall level, but you still need expertise in certain skills in order to succeed, like building up strength in order to defeat stronger enemies.

This allows you to constantly feel your character improving, and seeing that “Skill Level Up” text pop up adds a little hit of dopamine to keep you motivated. Most of your skills level naturally as you play, which helps keep game progression at a steady pace. At the same time, the game rewards you for taking the time to level up each skill as much as you can. 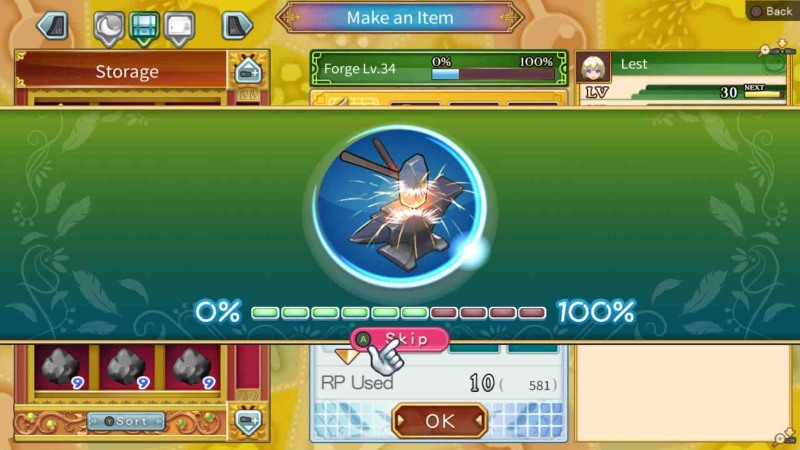 Crafting also demands your attention. You must craft weapons for your character or create items to complete requests that townspeople give you. Without doing these, your progress slows down immensely.

This part of Rune Factory is its strength because you have more involvement in it. Other parts of the game see you just take resources from dungeons and distribute them, but crafting still needs your direct input to create something before giving it to someone else, which helps to add a little purpose to the game at large.

I need to start out this segment with the way that Rune Factory 4 Special handles its farm sim side. This franchise offers you the chance to choose whether you want to include the farming side of the game. If you wish to only interact with the townspeople and further the story, Rune Factory allows you to do that. You still must use farming skills to fulfill requests for townspeople, like harvesting lumber or stone from objects, but that’s about it.

At the same time, you have at your disposal a simplistic but complete farming sim gameplay experience that can keep you in the game. Committing to your farm does make a few requests easier, but the farm never truly demands your attention a vast majority of the time. This is certainly preferential, but this option sits rather well with me just because I don’t particularly enjoy this side of Rune Factory. 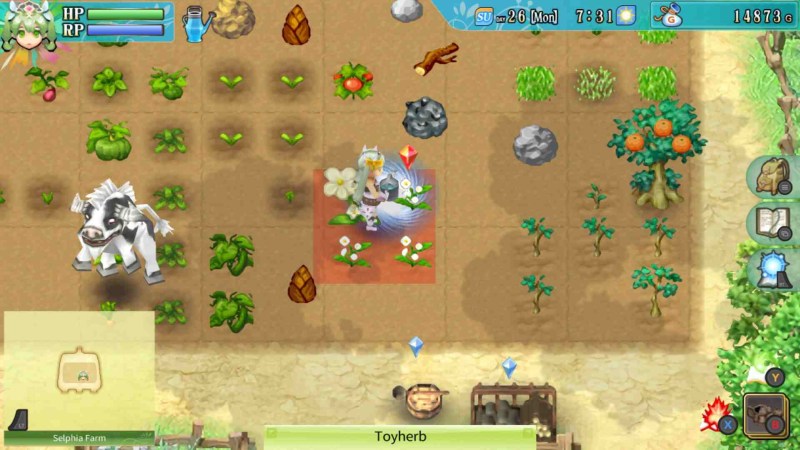 Like I said before, Rune Factory is a great first entry in the farm and life sim genre. Equally so, I miss the livestock of Stardew Valley and fully customizing my environment from Animal Crossing. Either way, I miss the depth of routine that comes from maintaining the environment I create.

I come to games like Rune Factory for the full experience: the combination of daily tasks with building community rapport and developing my own little farm nest egg. Unfortunately for me, this side of the game is just too simplified. All you have is growing produce and using the things you grow to craft or give to the townspeople. I’m constantly wanting ways to expand my farm, but Rune Factory doesn’t offer them.

Instead, farming acts more like a means of collecting resources for your town. As the prince or princess, you’re given the power to open new businesses and start new festivals. These bring more people to your town and increase the town’s overall appeal, thus generating more revenue. This side of the game sits behind a point system, Princess Points in my case.

In order to make decisions in your town, you must first earn Princess Points by fulfilling daily requests the townspeople submit to you. You build rapport with your people, and they grant you power to develop their town. This gives you some ways to customize the town, but these enhancements are mostly templated and you can’t just put a business anywhere you want. The game has a predetermined space for everything, just waiting for you to activate it. 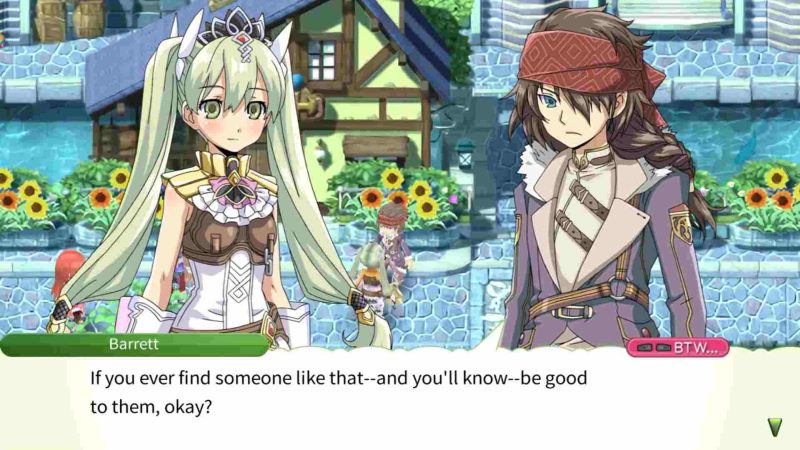 More RPG Than Anything Else

Rune Factory offers a different perspective to the farm sim genre, but it lacks the same kind of control you have over your environment in other games of its ilk. This caused me to fly through my days, doing the simple requests for my people in between the occasional dungeon that opens up through story beats. Then I go and clear out that dungeon to further the story before going to bed to fly through my days some more.

Basically everything you do brings people to your town, which is the bread and butter of Rune Factory 4. You succeed in the game when the community says you succeeded. Your decisions make or break your success, but you don’t completely get to choose how you reach that success.

I can’t say that the argument I’m trying to make is inherently negative. Even if this franchise is not my preference, I still see an appeal in how Rune Factory delivers its content. This does make for an accessible first dip into the genre. I like the idea of appealing to a community for their own good, both in Rune Factory and real life. At the same time, I keep missing the levels of control I find in other games in this genre.

Unlike real life, you are playing an experience that’s intended to cater to you in some form or another, and I can’t help but miss my own customized experience. There’s a beauty in the routine of this genre, but Rune Factory doesn’t nurture that, and once the story finishes, your community is basically set, leaving very little reason to keep playing. 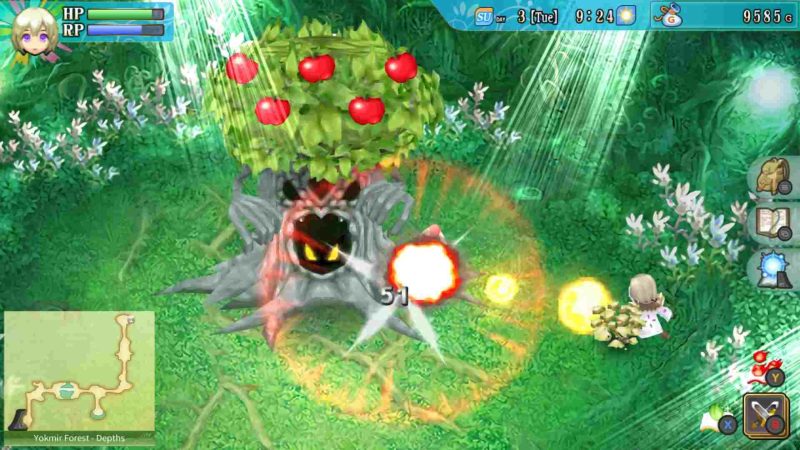 The entire game looks like an up-res’d version of a 3DS game, because that’s what it is. This doesn’t hold the game back by any means, but it’s still not a deep enhancement. Every once in a while, some sprite or item won’t have the same rendered detail that the rest of the game has, but this doesn’t show up too often. Just keep in mind that Rune Factory 4 Special is a rerelease of a portable game.

Sounds are a mixed bag through and through. The sounds of breaking rocks or chopping wood or crafting something all play into the task at hand, adding a nice touch to it. Voice acting, when it’s used for important lines of dialogue, sounds good, and none of the actors overdo it or feel underwhelming.

At the same time, the game gives each character a unique sound that plays almost every time a new dialogue bubble pops up. Some are fine and negligible, but others jump out at you and grate your ears. Particularly, when talking to Venti, the dragon deity, the game spits out this staticky grunt that’s just irritating. You can turn these off, which is nice, but doing so also turns off the occasional voice acted statements. They’re not missed, but the game loses some of its heart after turning off these character sounds.

A Good Entry Point To The Farm And Life Sim Genre

Rune Factory 4 Special dedicates itself to releasing the original vision of the 3DS game, which comes with its own pros and cons. The simplistic gameplay allows you to progress and feel productive with minimal effort, but that kind of presentation doesn’t offer the same kind of depth that other genre franchises do. This entry makes for a good first jump into the farm and life sim genre, but it’s hard to recommend to anyone other than genre newcomers or the die-hard fans. Don’t get me wrong: Rune Factory 4 Special offers up a good time, but it doesn’t have the kind of breadth to keep you invested past the storyline.

Rune Factory 4 Special offers up a different take on the beloved farm/life sim genre, focusing more on RPG elements. This makes Rune Factory 4 a good entry point for newcomers to the genre due to its ease of entry. At the same time, Rune Factory 4 simplifies a great deal of what makes this genre special. The catch-22 is accessibility versus gameplay depth here. While still a good game in its own right, it limits its own potential by diversifying so vastly.